In reality, there are 5 different types of crossbows out there:

Some may be best for beginners, and others may be perfect for the big game.

In this article we will discuss all the common types of crossbows, who are they meant for, their pros and cons.

The recurve bow is a type of bow that has limbs that curve away from the hunter when unstrung. The bent limbs give the crossbow a longer draw length and more acceleration.

That’s precisely the reason why this bow gives more energy and speed to the bolt. Also, the recurve crossbows can be used with shorter bolts efficiently. Hunters prefer the recurve in deep forests or while on horseback.

The simple design of the recurve crossbow limits the moving parts like the cams and cables.

That saves valuable weight and makes the crossbow easier to maintain. You can even change the string and return to your hunting session in a few minutes.

The simplicity is intended to make the crossbow quieter, so you can even use this bow to hunt fast-moving prey. Also, this design makes the recurve crossbow more durable.

Recurve crossbows are suited for beginners, so it’s only natural that they are lightweight, too. They are generally made of carbon fiber, aluminum, or magie!

The longer drawback characteristic to recurve crossbows rather than any other type is used to reduce the noise and recoil.

Also, the longer drawback creates stronger energy for the bolt when shooting. Since the bolt shoots at a faster speed, it’s ideal for hunting big game!

The recurve crossbows can be a bit noisy, because of their large power. These crossbows are suitable for the big game, and they are usually intended for pro hunters.

The string can be worn out easily, so you might need to replace it more often than with other crossbows. What more, the string can be hard to cock because it’s longer than the typical one.

The recurve crossbows can be too bulky to carry around, due to the wide limbs.

Lower velocity of the limb

Recurve crossbows need wider limbs to get the same draw weight and velocity as compound crossbows.

This type of crossbow is commonly used for target practice, as well as hunting. The pulley and cam system has either cams or wheels on each limb of the bow. They use the pulley system to increase the velocity of the limbs.

Thanks to the system, you get a shorter draw length and a quieter bow during firing. The system reduces vibration and recoil, and it can be let off to reduce the draw weight. 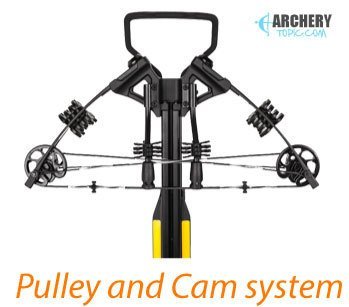 This type of crossbow is very simple and user-friendly, making it ideal for beginners.

The compound crossbow has shorter limbs than the, for example, recurve crossbow - so it’s easier to carry around. It’s perfect for beginners!

With the narrow limbs, the compound crossbow is easy to handle in tight spaces.

The prices are more affordable, so most people can afford the compound crossbows.

The durability doesn’t make the compound crossbow heavy, though. The materials used to make this crossbow are synthetic materials and carbon fiber, so the bow is resistant to weather changes.

Do note that the compound crossbow can be a bit heavy.

The compound crossbow can be hard to maintain, especially when you’re out hunting. You need a bow press to replace the snap string, so you might even need to bring it to the store for repairs!

This bow can make a lot of noise when shooting, but you can use dampeners to reduce the noise!

The limbs are put (reversed) at the back which change the balance and the weight is more likely in the middle of crossbow.

The Reverse draw characteristic for rifle crossbows, allows the bolt to shoot out at a faster speed. The benefit of using a rifle crossbow is that the reverse draw allows for more power stroke than the compound crossbow. 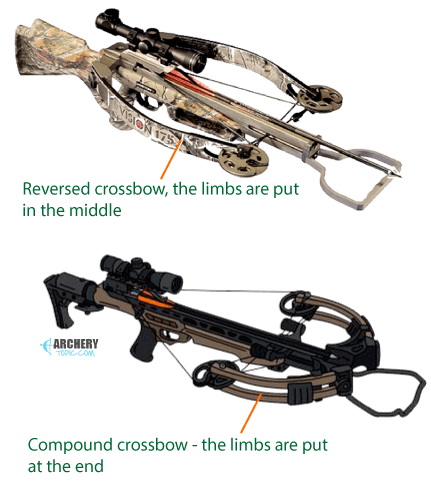 With the rifle crossbow, you will have no issues shooting your target. That is thanks to the sight and the fiber frame!

The lightweight feel of the rifle crossbow is thanks to the fiber it’s made of!

The rifle crossbow is perfect for hunting long distances. You can shoot a target up to 250 feet away!

The narrow, compact size of the rifle bow makes it convenient for carrying during hunting.

Unfortunately, you will need to use a cocking device to load the rifle crossbow.

The rifle crossbow can be complicated to use and figure out! 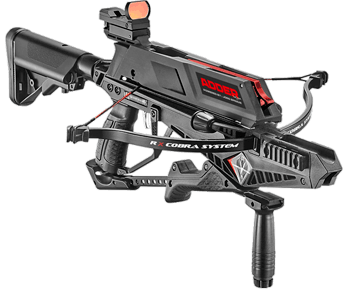 The repeating crossbow is a type of crossbow in which the actions of stringing, placing the bolt, and shooting can be done with a rather simple, one-handed movement. And all that, while the crossbow is stationary!

The repeating crossbow can shoot out more bolts than a regular crossbow. A magazine on the top contains the bolts, and the machine is used by moving the lever forward and backward.

The repeating crossbow may be the simplest one out there. It can be great for beginners since you need a single movement to shoot.

This type of crossbow shoots three times faster than your regular crossbow. This makes it perfect if you need speed for hunting fast-moving prey like rabbits.

As the name says, it’s a repeating crossbow and it can shoot many times, almost guaranteeing success.

The only thing that isn’t so great about the repeating crossbow is the mechanical design.

The design is rather hard to repair in the field, so you might have to lay off your crossbow for the day if that happens.

The self-cocking mechanism makes the pistol crossbow rather simple to use. Loading it is no different, as well!

The pistol crossbow is rather small in size, so it’s suitable for most people. It can fit anywhere since it’s not bulky!

The pistol crossbows are made of lightweight materials like plastic and fiberglass. That makes them very light and easy to carry around!

All pistol crossbows come with a self-cocking mechanism, perfect for beginners. The mechanism is a great aid for those still finding their way around the crossbows!

The pistol crossbow is very comfortable thanks to its ergonomic grip. Beginners tend to squeeze the crossbow more, and they won’t get hurt because it has such a comfortable grip!

The pistol crossbow is very accurate, making shooting the target rather easy. Success is almost guaranteed!

The pistol crossbows are usually made of cheaper materials, making them not very durable.

There are 5 different types of crossbows out there. Of course, each crossbow comes with its pros and cons!

Each crossbow is perfect for a specific use, and we hope that this article helped you figure out what you need. Either way, let us know in the comments section what you think!

Crossbow vs. Bow for Hunting (Which is Better and Why?)

Read More
Crossbow vs. Bow for Hunting (Which is Better and Why?)

How To Shoot A Crossbow Accurately

Read More
How To Shoot A Crossbow Accurately

Crossbow Effective Range – How Far Can A Crossbow Shoot Accurately?

Read More
Anatomy Of a Crossbow (with Pictures)

Is a Crossbow Considered a Firearm?

Read More
Is a Crossbow Considered a Firearm?