As a general rule, deer can smell a human scent out to around 400 yards without other varying environmental factors considered.

If you don’t want to spook whitetail, you need to know how close you can safely get to them.

This article will show you what factors to be aware of so that you know how much leeway you may (or may not) have when avoiding a deer’s nose.

Besides that, we will take a deeper look into how far a deer can smell and how to improve your odds of hunting success. 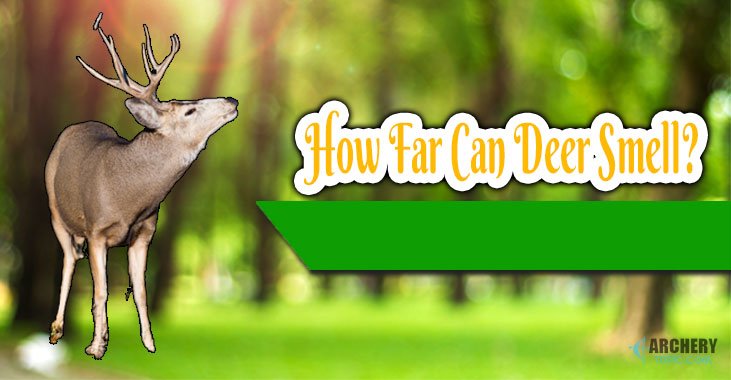 Table of Contents
What Are The Key Senses Of a Deer?
What Factors Affect Smelling Ability?
How Do Deer React to Smell?
How to Evade a Deer’s Nose:
Final Words:

What Are The Key Senses Of a Deer?

Deer, like most other prey animals, rely primarily on their senses to keep them out of danger and safe from predators.

Let’s quickly dive into what a deer’s other key senses (or defenses) are:

As we have already established, a deer’s nose is its primary defense against predators.

This is because, despite their other senses being of decent quality, their ability to smell is significantly greater.

How good is a deer's sense of smell?

We all know that dogs have a great sense of smell and are used for hunting, bomb and drug detection, etc.

However, dogs still have less than deer, at around 220 million (1.35 times more sensitive). 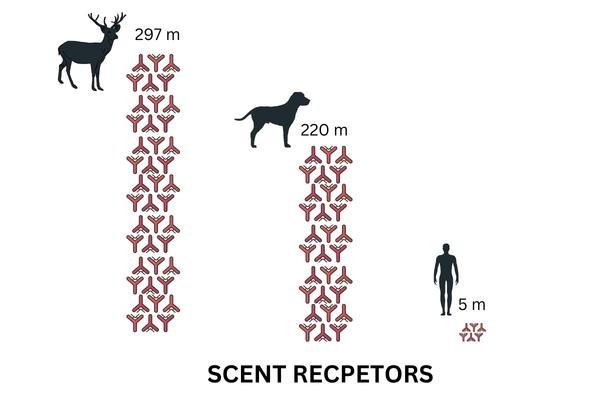 Deer additionally have another organ on the roof of their mouths, known as the vomeronasal organ, casually referred to as their “second nose.”

This is used mostly to detect smells related to reproductive interest and readiness, such as urine and estrous. 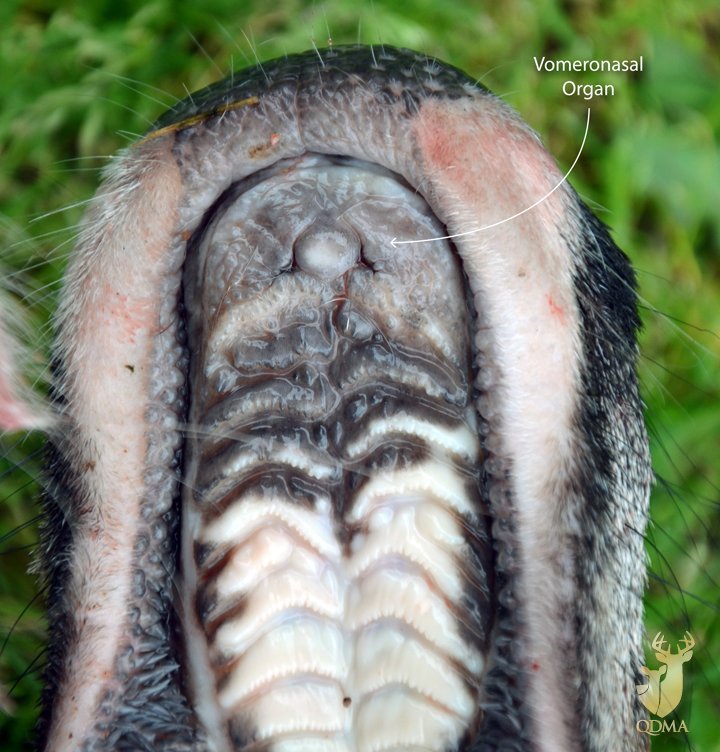 OK, so how far away can a deer smell you?

As a general rule, deer can smell a human odor out to around 400 yards without other varying environmental factors considered.

Given extreme scent-carrying wind conditions, it’s been stated that deer could smell out to even a distance of 15 miles! However, in practice, that is very unlikely.

Ultimately, the realistic distance a deer will smell you will depend on different variables (more on that below).

A study from the University of Georgia determined that deer have a frequency of hearing similar to humans.

That said, their hearing quality may be improved due to their larger ears and ability to focus on hearing direction. 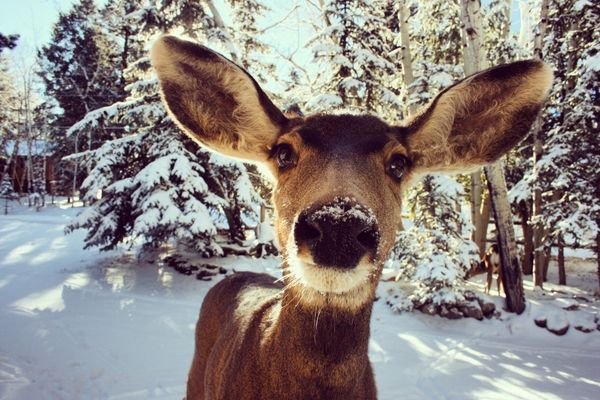 The distance a deer can hear will depend on the loudness of the noise, the frequency of the sound, surrounding noises and conditions, and other environmental factors.

Also, by nature of living in the wild and trying to survive, they are more in-tuned to listening for and discerning different sounds and determining whether or not they are likely to be a threat.

Human-like noises are likely to get noticed, so any way you can minimize noise or sound like the natural sounds of the forest, the better.

Although the scientific consensus on exact numbers is up for debate, it is estimated that deer have 20-40% of the vision capabilities of humans.

That means we can see approximately 3-5 times better than deer.

Deer also have a form of colorblindness, which limits their ability to discern between colors on the green-red spectrum.

That is why hunters wearing blaze orange only affect their hunting success a little. 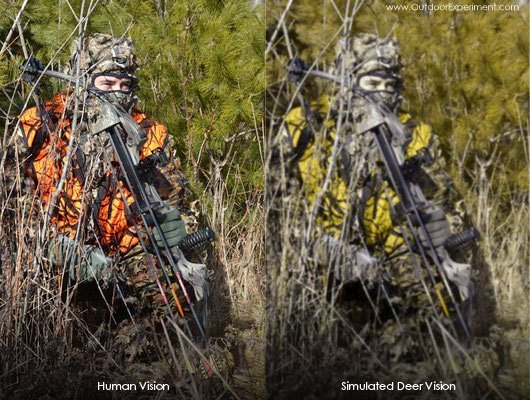 Well then, what are they seeing?

Deer do, however, see blue and yellow colors quite clearly. In general, deer are looking more for movement than a physical image.

As their eyes are wider apart, they have a broader peripheral view, which makes it more important to be careful with your movements in the field.

As with all aspects of hunting, some variables affect how your hunt will play out. Animal behavior and awareness are no different.

Some of the key factors that play into how much deer can see include:

The wind is the most significant factor affecting the distance that deer can smell and how effective their sense will be in detecting your scent from a distance and recognizing how far away and from which direction it is coming.

The general smell is based on particles in the air reaching the nose and being interpreted.

Wind plays a factor in this as the wind can either move that air towards or away from the person or animal.

Wind can increase the distance a deer can smell if the wind is heading in their direction.

However, if the wind is blowing in the opposite direction, the smell may not even reach the deer, which is a great situation for hunters.

The wind that swirls is still likely to be received by the deer, although it may be difficult for them to determine the direction and distance of the origin of that scent. 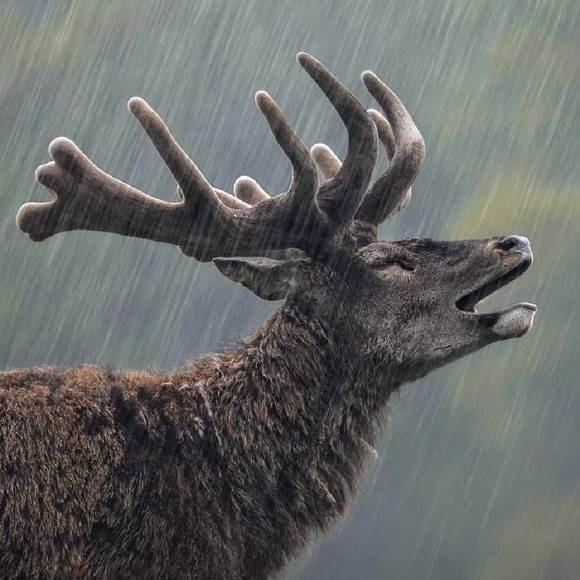 It may not be obvious initially, but rain also impacts a scent’s ability to carry through the air. Rain has a dampening effect on scent, meaning it travels less far.

Rain not only dampens the smell in the air but also washes away and dissipates smells left on the ground.

The rain will likely reduce the scent left behind from your hiking boots, sweat, or in-field bathroom breaks.

It is estimated that the smell of a hunter or hiking boot trails in the woods under normal (non-rainy, non-windy) conditions can stay detectable by deer for up to 10 days.

This may seem obvious, but it is an important factor to consider when considering the actions or choices we do or do not take when out in the field.

How Do Deer React to Smell?

Depending on what the deer is smelling, its strength, and how sure they are about that smell, it will either have the deer running for the hills, curiously investigating, or ignoring it altogether.

If a deer smells something perceived as instantly threatening, they are unlikely to stick around and will often take off running in the opposite direction. Instantly to safety.

On many occasions, a deer may smell something that is worrying to them, but instead of running, it will remain in that area rather than be on high alert.

At this point, they will likely be heads up, looking around; either trying to smell more to better determine the threat or looking around for any visual cues of danger.

If a deer picks up your scent, you do not take any actions that could further scare them, such as making noticeable movements or human-like sounds. 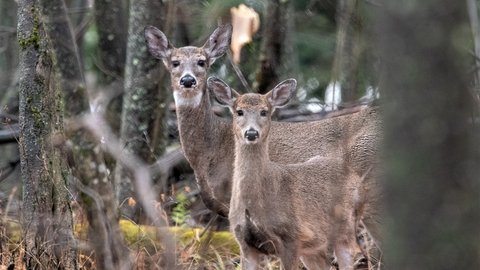 What Happens if I Spook Them?

If a deer picks up your scent and takes off running, it is most likely that the deer will not return anytime soon.

If the deer moves off casually, it may hang around a little longer in that area, but they just wanted to put a little more of a safety buffer between itself and the source of the scent.

Not all deer in all situations act the same.

How to Evade a Deer’s Nose:

While there is no proven way to completely trick a deer’s nose, there are ways to improve your odds by dampening or utilizing some of the factors mentioned above.

When it comes to reducing the risk of a deer picking up your scent, one of the best ways is to “play the wind.”

Wind-based hunting strategies and movements are essential, regardless of any action you take for personal scent reduction (see below).

Hunting into the wind, or at least crosswind as a minimum, is the best approach. Hunting with the wind at your back and blowing in the direction of the animals is likely to end up in a failed hunt.

A great way to do this is to use a wind checker, a small bottle of talcum-like powder intermittently squirted into the air to see how the wind movement is acting.

This is usually more effective than throwing up blades of grass or the damp finger technique, as it gives a more visual representation of whether the wind is swirling. 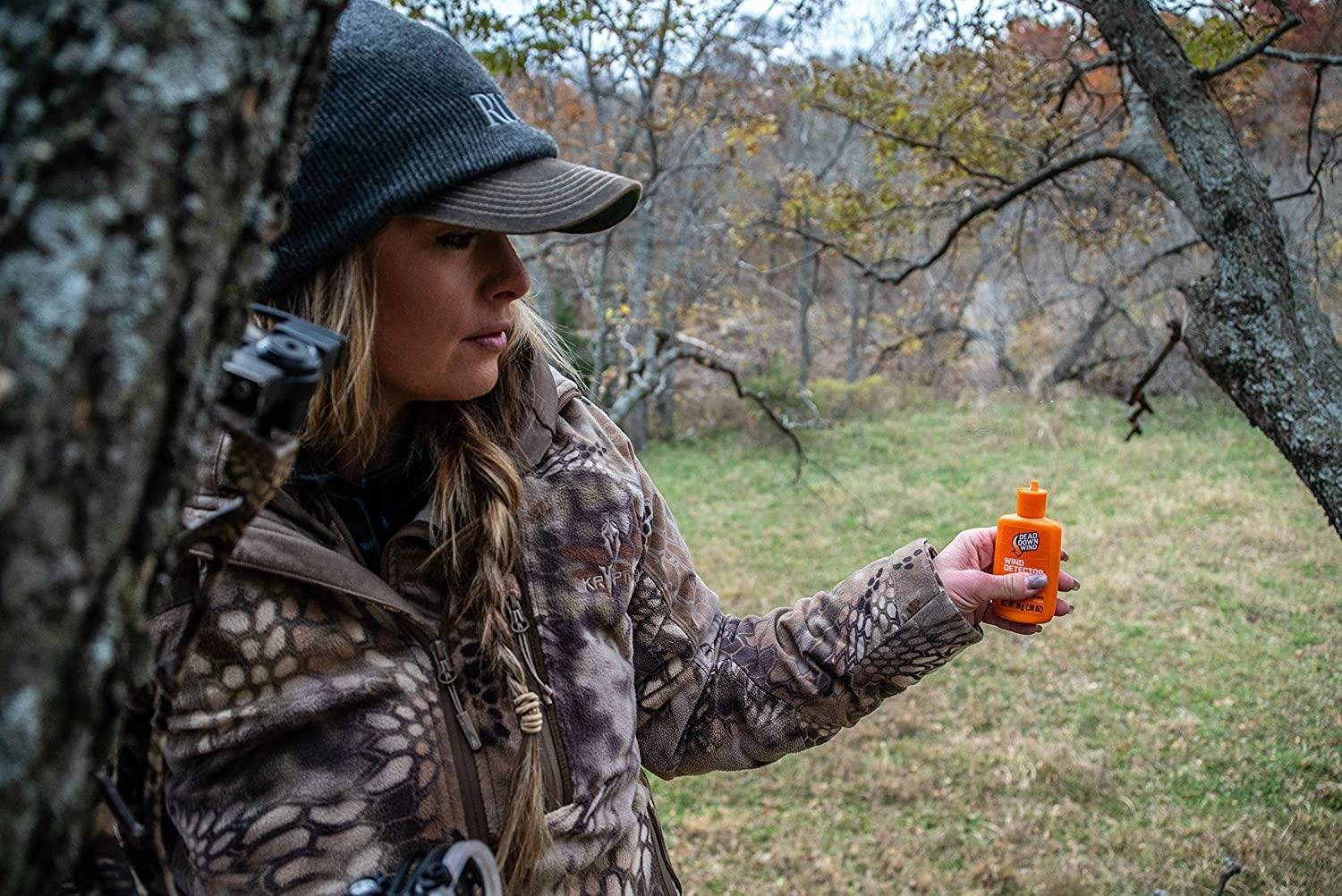 For more on this subject, check out this article on deer hunting in the wind.

A way to reduce the chances of being caught out by a deer’s nose is to reduce how much scent you give off or leave behind.

A lot has been written and said over the years about the use of scent remover products in hunting. They can occasionally be helpful, but the jury still determines whether they are worth the cost.

In the end, no amount of scent removal methods will outweigh smart hunting practices and strategies.

When hiking in the woods, good hygiene is important. This can be helped both pre-hunt and during the hunt by following a few good habits.

During hiking, try not to over-exert, which can lead to sweating and increased body odor.

Take your time wherever possible, and take breaks. 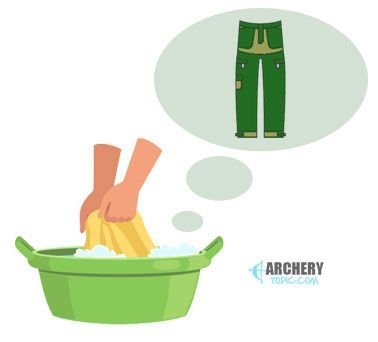 Deer have a very strong sense of smell and rely upon it for survival. If a deer gets a scent of you, it will likely negatively impact your chances of hunting success.

Natural factors such as wind speed and direction will affect how far a deer can pick up a smell. Depending on this, it can be anywhere from a few yards to a few miles.

Smart wind-based hunting strategies and consideration of personal hygiene and in-field food choices will help you steer clear of the deer’s primary defense: their sense of smell.