Crossbow Effective Range – How Far Can A Crossbow Shoot Accurately?

For novice shooters, crossbows could be mysterious because they are somewhat different than any other method.

Even some skilled shooters may not know much about the crossbow effective range, which is around 40 yards, and it’s usually less than that.

Luckily, we know all about it, and better yet, we will share the knowledge with you. So, continue reading to find out: 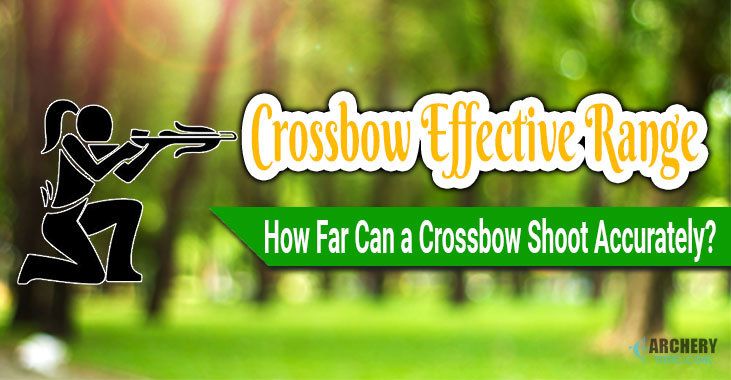 How Far Can a Crossbow Shoot Accurately?

The effective hunting range, or how effective the crossbow is at shooting, depends on various factors.

For instance: you’re using a modern crossbow that shoots out bolts at 300+ FPS. The effective range is around 50, perhaps even 60 yards, but no more than that.

Obviously, some experienced hunters can even go over 60 yards, up to 80, and the shot would still be powerful to kill medium, and some big game, too.

However, that is not the question here - you need to know the effective range to deliver an ethical shot.

What is an ethical shot?

An ethical shot is a shot that penetrates the vital organs of the target and kills them almost instantly.

The truth is, even most experienced hunters cannot deliver exact shots all the time, especially not when they are far away from the target.

The longest hunting range doesn’t equal the effective range! If you’re 80 yards away, it will be far more difficult to deliver the precise shots.

The story is the same with most hunters, which is exactly why they choose to take a shot at less than 40 yards away, even 20 yards.

When you’re closer to the target, you will be completely sure of the spot where the bolt will land.

The arrow will still be able to kill from further distances, but you risk the deer jumping the string because they get startled by the crossbow’s noise.

If you’re too far away, you risk wounding the animal but not killing it - and no ethical hunter wants that.

What Affects the Arrow Velocity?

So, we have concluded that the range varies from lots of factors. Here they are:

If you are closer to an animal, it’s more likely that you will see potential obstructions that could meddle with your shot. If you are further away, the possibility that you could miss or hit.

Most modern crossbows nowadays use scopes that magnify your view and help you see things as if they were much closer, but you could still miss things.

For example, the scope usually cannot magnify the view enough to see a branch that is right in front of the animal. You could easily miss the shot if you are too far away to spot the obstructions.

The arrow drop is related to the arc of the arrow when flying through the air. In essence, an arrow that shoots out at the speed of 400 FPS helps the arrow have less arc during the flight.

However, this advantage only works on distances up to 50 yards. If you’re further away, even the fastest crossbows out there will experience the inevitable pull of gravity.

The speed of the shot of all crossbows is stated as "up to" a certain speed. It is related to the shot's speed using the lightest weight arrow, which is not the best option for hunting.

So, if you’re using heavier arrows, the shot’s speed and kinetic energy will be significantly slower.

However, they aren’t only affected by the arrow's weight but the distance because the arrow will be slower and slower as it travels through the air.

If you’re too far away, the arrow could lead to poor arrow penetration and unable to deliver the killing shot.

Since the arrow is a projectile, it can throw off the target with the wind. At the distance of around 50 yards, the wind drift is usually measured in inches - but it could be more if the wind is powerful.

That’s not even close to everything - at 100 yards, the wind drift could be over a half foot. Because of that, you could miss the animal, or worse - wound them badly, but not enough to kill them.

If you want to be an ethical hunter, you need to consider the responsibility of taking the shot. If you’re closer to your target, it’s less likely that anything will obstruct the shot, that the wind will drift the arrow, and soon.

If you’re shooting long-distance, it’s more likely that any of these factors will come into play.

Hunting is a game of probabilities, and the most successful hunters are the ones that always choose the high probability shots.

The animal could always be startled by the sound of the shot, even if your crossbow shoots out at over 400 FPS. Fast-moving prey like whitetail deer and rabbits can react to the sound and move away within milliseconds.

“Jumping the string” is a term used to describe the moment when the preys hear the shot and getaway. This also increases the risk of you injuring the animal but missing the kill shot.

The best hunters always take into account the mental state of the deer. Does the deer seem calm or jittery?

If the deer is nervous and jittery, the hunter will have to be much closer to it than to the calm one feeding itself.

If you want success in hunting, you will need to take all these things into account. If the deer seems jumpy, it may be best to get a little closer to it if you want to deliver the kill shot!

How To Improve Crossbow Effective Range?

To get the most out of your crossbow, you should know the effective kill range and how to improve it. There are a few efficient ways to do that.

You need to know your crossbow and your equipment very well.

One of the things you ought to invest in is an excellent scope to maintain a decent effective range.

There is no point in trying to aim at a target you cannot physically spot. So, you need to know exactly how everything works and how to use it!

Even if you do not master it - don’t worry too much about the whole deal. Remember that you will become more efficient with your crossbow over time if you get more practice.

To get more out of your practice time, set a maximum distance, even if you’re shooting at a range.

Set a maximum distance with a modern laser rangefinder, for example, 50 yards since that is a great starting point for practicing.

It could affect your effective range. The crossbow is more of a short-range weapon, unlike the rifle, which is relatively efficient in 70  to 80 yards.

Keep in mind that a slow walking deer can move 3 to 4 feet in just one second, and if you’re too far away, you could easily miss it or wound it!

The crossbow effective range of the shot isn’t the longest, as well. It is related to the distance at which the hunter can deliver a precise kill shot.

Because of that, most people try to stick to under 40 yards. Smaller distances allow you to have more control over the shot and to be more precise.

Being closer to the target helps you deliver ethical, clean shots that don’t just make the animal suffer.

All in all, let us know what is your effective range in the comments!

Best Pistol Crossbow 2021 – Getting Your Hunting Mode On