Things You Need to Know About Mongolian Bow

In the early time, the Mongolian bow played a vital role in the survival of the Mongols. Their bows were formidable and superior compared to the other weapons created in their time.

The Mongols were able to conquer the Manchu dynasty because of their great line of defense. Mongolians used their bows until they were no longer a match against guns and gun powders. So what makes the Mongolian bow special?

During the time of the Mongols, dynasties emerge on the east part of the world and they were constantly trying to overthrow dynasties. The Mongolian bow was the means of defense.

Mongolian women can wield bows. Some women are part of the infantry while some of them stay at their tribe. Women soldiers rode along side men during the invasions of the Khan dynasty.

Women that were not part of the line of defense were taught to wield bows in order to hunt games and also for self defense.

Arrows and Bows : What are they made up

Mongols are very particular in how they make the arrows and bows. Their arrows were made up from birch, with the height of 80 to 100 centimeters.

Though any feathers will do for fletchings, but they favored crane feathers compared to eagle’s feathers. Eagle feathers are very rare in those times. Arrow heads varied because of their different uses.

Mongols used big metal arrowhead for war and catching big games while wooden arrowhead and bones are used when they catch smaller games.Arrows for the mongolian bow were lethal.

They were created to make a big impact once they aim it to their opponent may it be an enemy or a prey. 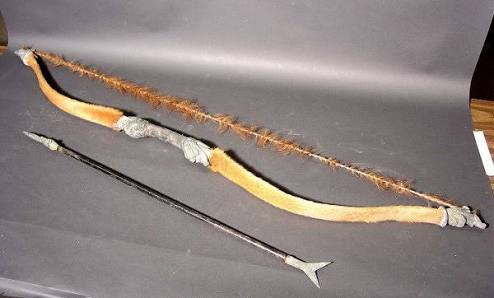 The main frame of the bow was made up of birch because of its pliability. The bow can measure up to 160 centimeters when unstrung. It forms a semi circle, but when it is strung, the bow bents inwardly forming a double curve.

The double curve allows the arrow to accelerate once the archer lets go of the arrow. The frame is elongated and covered by flattened horn of the mountain sheep. This helps the pliability and snapping ability of the frame. Then the frame is layered with sinew substance.

Though the raw materials in constructing the Mongolian bow were abundant in their time, the process itself was very tedious. The Mongolian frame must be able to pass the expectation of the Old Mongols.

The traditional bowstring are made up of animal hide, preferably the horses’s hide. To make the bowstring, the fat was removed from the animal hide.

Then, it is dried and stretched to form the string. Then cotton and silk were incorporated in the hide. Then the archer can now put the string in to the bowframe to complete the mongolian bow.

Presently, Mongolian bows are still much prefered and superior compared to the modern day bows.

It’s not only strong and reliable but its creation left the world at awe. Who would have thought, from the simplest resources comes the strongest weapon that ant man has ever made.