How to Keep Bugs Away While Hunting (7+ Effective Ways)

​Every hunter knows that the hunting experience brings about satisfaction, adrenaline rush, and instincts.

It’s a personal experience of nature and being alone in it.

The smell of the dew, rays of sun finding their way through the branches from the horizon, deer tracks ahead...

You start drifting further and further in the woods, excited because you know that each hunt is a fresh experience. Just when…

No matter where you hunt, bugs will find their way. They seem to be a bit of hunters themselves.

​Do you want to avoid being their next meal?

If so, today you’re going to ​know how to keep bugs away while hunting.

​Which Bugs and Insects Can Ruin Your Hunting Season?

​Before we begin, we must get to meet our enemies closer, so that we can fight them efficiently.

Most of them struck early in the season, and if they were to be compared in the level of annoyance they bring about, it would be a dead heat. 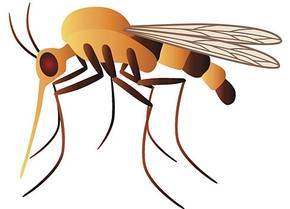 The no.1 enemies are, definitely, mosquitos.

While they are not the most dangerous out there, they are omnipresent.

It seems like they are always around the corner, waiting for new victims!

Luckily, these boring bloodsuckers are also the easiest to deal with.

Moreover, West Nile, malaria, and yellow fever that mosquitoes can transmit aren’t prevalent in the US, and there are approximately no more than 1500 cases of malaria reported annually.

Still, it’s better not to take any risks at all. 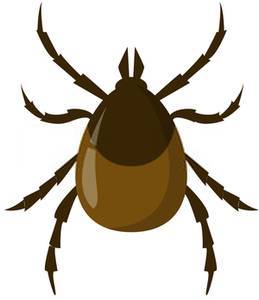 Next bloodsucking bugs that can bother you while hunting are ticks.

They are tricky because they are sometimes so small that you cannot notice them even if they are attached to your body, not to mention the grass, etc.

The worst tick-borne disease is Lyme disease, alongside some other diseases they can spread.

Even if they don’t, an irritating rash, muscle pain, and fatigue when they bite you aren’t really tempting.

What helps with ticks is complete prevention! 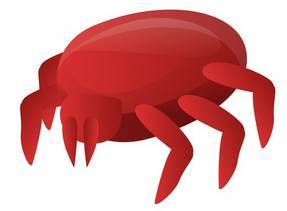 Another kind of bug present in the woods is the Berry bug, best known as the chigger.

While they cause an extremely annoying itch, they do not carry some severe diseases. 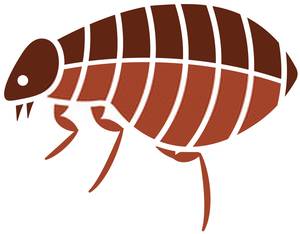 On rare occasions, fleas can transmit a cat scratch fever, but their three to four bites in a line are probably the worst kind out there.

They are usually on the carcasses of animals, but they can also be found on fur. 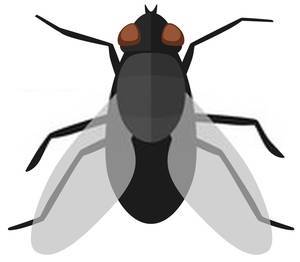 Black flies are equally annoying, though they do not transmit any common disease to humans.

So, what are the best ways to protect yourself from these all-present, blood-thirsty creatures?

​How to Keep Bugs Away While Hunting:

​Arguably, this is the most efficient way of keeping yourself safe when hunting, and the best solution for battling the bugs.

The market is full of bugs and insect repellents, and not every kind is beneficial.

Moreover, some repellents can have a negative effect on your hunt and ​spook your prey, which is another thing you don’t want to happen.

So, stay tuned and learn all about the kind of protection you should use!

​One of the most popular chemical options is traditional bug spray.

Again, they come in many shapes and sizes - from scented to unscented, packed with chemicals, and less strong.

But they all have the crucial ingredient that focuses on repelling the bugs.

Most often, this is DEET (diethyltoluamide), and no one can deny that it is efficient at protecting people from insects and their bites.

But there is a trick - animals, especially the American whitetail deer, have an overly sensitive sense of smell.

Their scent receptors are easily triggered by many chemicals and odors (including human scent).

And - you guessed it - they are not particularly fond of DEET. It is also toxic to the environment.

So, you want to get a bug spray that has an alternative active ingredient, less toxic, and more neutral for your prey.

My recommendation here is to get a bug spray based on Permethrin.

Once it dries, there will be ​scentless. It is equally effective at repelling bugs, but less noticeable by the deer and other animals!

If you want a spray that is more gentle to your skin, I recommend the Avon Bug Guard Plus.

​As some hunters may dislike chemicals that are used in bug sprays, there is an alternative that I want to mention - natural bug sprays.

Instead of an active chemical ingredient that repels bugs and insects, this kind of bug spray uses natural ingredients.

Most popular are lemon and eucalyptus oils.

They are equally good at protecting you from mosquitos, ticks, and other bugs that may bother you, though they are more aromatic and, hence, detectable to your prey.

People have also come up with a number of natural homemade bug spray formulas, most including lemon oil as the main ingredient to achieve repellency.

I must admit - I am not a fan of natural bug sprays.

I agree that you should use them outside of the hunting context, as they are more environmentally friendly and easier on your skin.

However, for this matter, you don’t want something that could ruin your chances of tracking and hunting your prey.

If you still want to use a natural bug spray (perhaps if your skin is sensitive to active chemicals present in traditional bug sprays), I recommend going for a high-quality one.

It has little to no scent, such as the unscented Cutter Dry spray that I was more than satisfied with.

​The ThermaCELL repellent devices dominate the market, and for a good reason - they are a perfect balance of chemical and natural repellents.

Assuming you’re not already familiar with this smart device, I’m going to say a few words about how it works.

If you are, feel free to skip the next paragraph knowing that you’re using one of the best methods for keeping bugs away while hunting!

The ThermaCELL device uses butane cartridges to warm a saturated mat that is put on top of a metal grill.

The repellency ingredients are then activated and spread into the air so that a 15-foot invisible zone emerges and keeps the bugs away. Pretty convenient, huh?

My favorite options amongst all that I have tried out are Thermacell MR300 and Thermacell MR150 in the Woodlands Camo variant that perfectly blends with the environment.

Every hunter should own one of these! 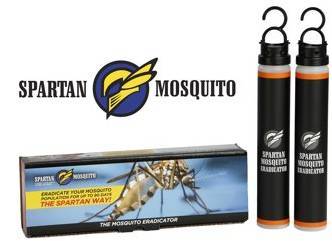 ​Yet another device similar to the previous one is the Spartan Mosquito Control.

This water-based device works in a similar way to the ThermaCELL repellent by emitting substances that repel insects.

It first attracts them, and then releases chemical substances that kill them.

It is for a very narrow circle of hunters, though - it’s best for controlling the mosquito population of a particular area, as it eliminates 95% of mosquitos for up to three months.

So, if you hunt in one and the same property, this repellent might be a great pick for you! 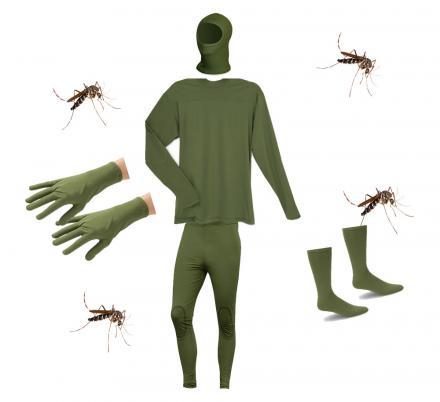 ​Not only sprays are repellent - clothes can be, too.

Remember Permethrin that I mentioned earlier, used in bug sprays?

Well, it is also utilized in the production of insect-repellent clothes that are treated with it to keep bugs away from you and kill them if they still decide to land on your clothes.

Vest and jacket are particularly important, as your torso and hands are totally exposed to the bugs.

You can also create your own repellent clothes by spraying Permethrin on it.

You just spray the clothes the night before the hunt and let it dry.

In that way, your clothes will protect you from the ticks and chiggers, and you can bring along a ThermaCELL to keep the mosquitos away. 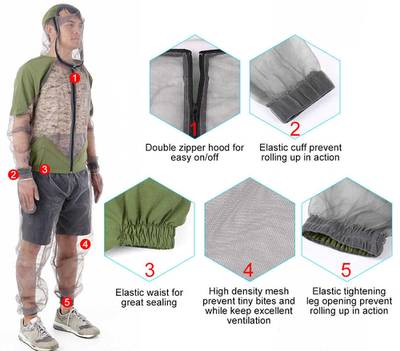 ​You can wear clothes with a net that prevents insects and bugs from getting to your skin.

The most popular are face covers, as the face can often be the most problematic part of your body to protect.

Also, there are other options, such as a jacket that comes with the face shield.

Overall, the net does keep your skin less exposed to these nasty creatures.

But it isn’t a 100% guarantee that a bug won’t find its way to crawl underneath. Repellents are still unbeaten! 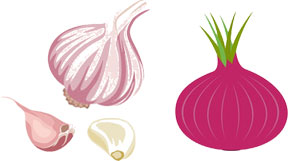 ​While this method will not be efficient on its own, it is a great way to add an (invisible) extra layer of protection.

And it keeps you healthy, too!

That’s right - some foods can repel bugs and insects.

Most notably, garlic and onions are good against mosquitos because they release allicin that keeps them off. It is released through your pores.

Also, apple cider vinegar has a function in altering your natural scent so that it becomes less appealing to those nasty bloodsuckers!

Just like it is used in natural bug sprays, lemongrass, and lemon juice are mosquito repellents, so their intake is also advisable.

Those were the primary methods that will keep you safe from insects and bugs while you’re in the woods.

They are first on the front, so to say. But they need support.

And the support is the additional measures you can take to protect yourself:

​a) ​Tuck your bibs or pants into the top of your boots.

This can keep ticks and chiggers away from your flesh.

b) Know your location

If you’re hunting in a new area, ask outfitters to get you acquainted with the insects and bugs you’re about to “meet.”

Who knows it better than them?

c) Always check your body for ticks after you’re back from the hunt.

Sure, prevention is vital, and if you take all the steps I’ve discussed, 99%, you won’t find one. But it’s still better to check.

​Do not let bugs and insects stand between you and your pleasant hunting journey, or pose any threats to your health!

An ounce of prevention is worth a pound of cure.

​​What is your favorite method? Are you using some of these already? Would you add something to the list?

Let me know if you know how to keep bugs away while hunting below.

How to Layer For Cold Weather Hunting
What are the Advantages/Disadvantages Of Hunting From An Elevated Stand?
Deer Hunting with Decoy (A-Z Guide)
Best Hunting Dog Breeds (Ultimate List)
How To Apply Camo Face Paint For Hunting
Mobile Deer Stand Setup (3 Lightweight Suggestions)