Crossbow vs Compound Bow: Which is Better for Hunting?

Crossbows generally tend to shoot out arrows at much higher speeds than the classic bow.

For crossbows, the arrow speed is between 300 and 470 FPS, and over 100 pound-force of kinetic energy.

That may not seem like a thing until we compare it to the compound bow. Classic bows get around 270 to 310 FPS of speed and between 60 and 90 pound-force of kinetic energy.

This is because the crossbow has double draw weight with shorter power stroke.

However, keep in mind that when shooting 100 yards away, that doesn’t mean that you get a clean, accurate shot from that distance. For ethical shots, you will need to be closer than that.

You will need lots of practice to become very accurate - using either the crossbow or the bow. However, crossbows are easier for shooting very accurately.

What is so great about crossbows is that you need very little movement to shoot, so crossbows are easier to harvest. Because of the little required movement, you are less likely to spook the deer.

To get a grasp of the basics of the crossbow, you need around half an hour. After that, you should be already comfortable using the crossbow.

The crossbow is very beginner-friendly, so you should have little to no issues figuring it out. Also, if you used to be rifle hunting, it should be an easy transition to the crossbow.

The crossbow is as safe as a bow, both being significantly safer than a firearm.

Crossbows are legal for hunting in Ohio since 1976, so there have been a significant number of injuries since then.

Still, those injuries were caused by misuse and improper handling.

The bolts in the crossbow are preloaded, so you are always ready for hunting. Your crossbow is ready to fire like a rifle always.

Using the crossbow, spotting the target is fairly easy. That is, using the scope - many crossbows come with a built-in scope, but you can purchase your own if the built-in one is not good enough.

The frame of the crossbow is pretty compact. So, crossbows are generally fairly easy to carry and to move around.

Just one crossbow can include many family members. Everyone can use it and shoot targets with it!

With the crossbow, you get a couple of extra weeks for hunting during the archery season. 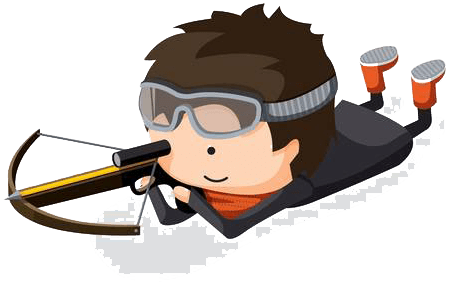 Crossbows can be rather heavy and cumbersome. Because of their weight, they can be also awkward to handle in the stand for a long time.

Crossbows are larger dimensions-wise than compound bows. That makes shooting the prey behind you difficult, because the crossbow will be too wide and even hit the tree.

If you miss the prey in the first shot, it’s nearly impossible to get the second chance to shoot at the target. Reloading the crossbow is a pain, especially if you’re sitting in a hang on treestand where you are cramped.

Crossbows can get rather noisy, especially when compared to classic bows. It comes from more power and more kinetic energy it holds.

Crossbows need more repair because of their complex design which contains many moving parts, such as cam and pulley, worn strings, railing system...

Holding a heavy crossbow steadily can be a pain, especially when aiming the bucks walking to your killing zone. However, you can use a shooting stick to help you out.

Crossbows use bolts which are shorter than arrows and stable if you shoot at a target over 40 yards away!

The greater distance when shooting, the flatter arc and less are the reasons why the crossbow is more efficient than the modern crossbow.

To figure out how the crossbow works and how to use it, you will likely need just a few hours.

With the vertical bow, you learn a lot more, such as:

Do keep in mind the law restrictions in some states. Some laws reserve the use of crossbows for people with handicaps.

For instance, Florida requires a special license for people who can’t draw a bow, and have a medical certificate to back up their claims.

This means that even disabled people can use crossbows during the season, but supervised and with proper permits. Always adhere to local and governmental laws to avoid trouble!

Who Are Crossbows For?

For disabled, or older hunters

Especially people with injuries like rotator cuff tears, past fractures and dislocations, surgery injuries, or the conditions such as arthritis.

Also, young hunters can make use of the crossbow, since they can struggle with the draw weight of the compound bow. Hunters as young as 8 can use the crossbow!

Moreover, crossbows are great for beginners - since they can struggle with pulling 40 lbs of draw weight. Using the crossbow takes less practice to figure out.

Also, using the crossbow is perfect for those that are used to hunting with a rifle or a shotgun.

The crossbow is great for ground blind hunting, and spot and stalk hunting. As you don’t want to bring a bucky crossbow to your narrow treestand. 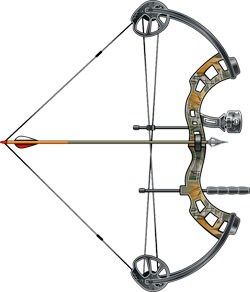 Crossbows make a lot of noise during shooting because they generate more power, kinetic energy, and speed during the shot.

Modern crossbows do come with dampening, but the vertical bow is still quieter. There is no worry that you might spook deer with noise when using the classic bow.

Reloading the crossbow takes time because some even need a cocking device to load.

However, with the vertical bow, if you miss the first shot, you can just take out another arrow and draw back at ease. The reload time gives you more chances to shoot at the target.

To hunt with a vertical bow, you need less space than you do for hunting with a crossbow. Crossbows are difficult to navigate in cramped spaces, but luckily, modern compound bows aren’t!

Vertical bows are 25 - 30% lighter than crossbows. This is something to keep in mind when you go hunting - a bucky bow will make the whole trip painful and uncomfortable.

Also, since they are generally lighter, they are easier to bring to the treestand.

The mechanical advantage of using a compound bow lies in the “let-off”.

The vertical bow uses cables and cams, which reduce the holding weight by storing energy when the bow is at full draw.

It is called “let-off”, and it’s calculated as a percent of the full draw weight.

So, for instance, a vertical bow with 50 pounds of draw weight can have a let-off of 80%. That gives us a weight of 10 pounds at full draw.

The let-off is rather helpful for hunting or competitions because it allows the shooter to hold the bow at full draw for a longer period. That also enables them to have a more accurate shot.

Easier To Stay On Target

Keeping your eye on the target is easier using a vertical bow, due to the arm and back tension. 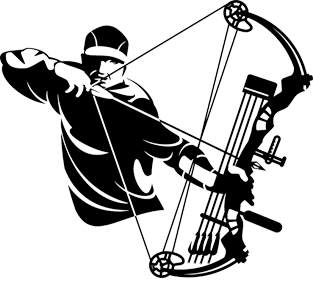 Using the vertical bow is almost exclusively reserved for stronger hunters, with an upper body strength. Using the crossbow might be easier for those with a smaller build.

The physical limitations of using a compound bow make the crossbow a bit more attentive to all-sized hunters.

The crossbow is rather accurate, thanks to the scope. It enables you to set sights on a target 100 yards away.

However, the vertical bow requires you to rely on many factors to shoot accurately, from your standing form, aiming techniques.

Using the compound bow requires you to get a shot sequence, such as:

It means that you need more practice time. However, using the vertical bow can be much more fun!

Who Are Vertical Bows For?

Vertical bows are perfect for hunters that like the traditional approach to hunting. Bowhunting with a vertical bow is as old-timey as it gets.

Also, vertical bows are great for a treestand hunter. Maneuvering the vertical bow in the tree is easy-peasy!

Crossbow vs. Bow - Which One is Better?

These two bow types are rather different in their use. To use the vertical bow, you will need lots of practice and lots of skill.

The crossbow requires the hunter to have previous gun skills, rather than the bow skill. In my opinion, the compound bow takes the lead for hunting, after all.

What do you think, is the crossbow better for hunting or the compound bow? Let us know in the comments!

Read More
Anatomy Of a Crossbow (with Pictures)

Hi, I'm Robert Gate, a hunter from Texas and Founder of ArcheryTopic. I first learned archery from my dad when I was 12 years old. He gave me a Mathew bow as a gift and instantly fell in love with the pursuit.