The Centerpoint Sniper 370 is one of the best crossbows money could buy - there is no doubt about that.

This model is the most popular among beginners and women hunters around the world. The bolts will shoot out like the speed of light into your target.

The rather compact size is also something worth considering since you will be able to move with ease, even when you’re out for hours hunting.

The new version of the Amped 415, the Sniper 370 comes with a palette of rather useful accessories - so you don’t have to invest in extra gadgets later.

The extras, along with the price of the product, make the Sniper 370 a great deal.

The specs are pretty similar to the updated version of the crossbow called Sniper Elite. If you’re looking for a budget crossbow, check out our Centerpoint Sniper 370 review!

Founded in 1924, the Crosman company has a rich history of producing various shooting products, becoming more popular each year.

Mostly famous for their BB guns, they also make one of the best crossbows out there. Their bestseller, Sniper 370 earns its name because the aim and the shooting are perfectly accurate.

What Do You Need To Consider Before Buying?

There are various problems concerning buying a crossbow - and the Centerpoint 370 is no different. So, let’s get on it!

The ideal user for the Centerpoint 370 is someone who isn’t looking to spend too much money on the crossbow. The Sniper 370 is a budget crossbow, and it will not break the bank in any way with the affordable price tag it has.

What’s more, the Centerpoint’s Sniper 370 is a great choice for a first crossbow. So, it doesn’t cost too much money for a hobby you’re only starting in! If you want to see how you would like hunting, it would be best to opt for the Sniper.

Someone with a smaller, more delicate frame would certainly appreciate the Sniper 370 for what it is - since it doesn’t weigh too much.

This crossbow is the perfect choice for women, and any woman should be able to carry this crossbow for hours, without any issues.

Talking about the assembly is usually just talking about the ease of it. For beginners - and most people who are using the Centerpoint Sniper 370 are beginners, it’s important to know that the crossbow is easy to assemble.

In case some of you didn’t know, most crossbows will come unassembled and all you have to do is follow the instructions. For some crossbows, the assembly can be challenging.

I was surprised to see that I encountered no issues during assembly. Even those who are just finding their way around crossbows will assemble it with ease.

When discussing crossbows, it’s important to remember that this crossbow is made for outdoor hunting, small and big game. Of course, it can be used at the shooting range, as well.

If you want to use the crossbow on the small or big game, the Centerpoint Sniper 370 is your go-to. That may sound discouraging if you're a beginner and you're still at the shooting range.

Don't let that happen, as the Sniper 370 is perfect for using at the range and helping you practice accuracy.

This crossbow is suitable for the small and big game, meaning you can shoot all kinds of prey with it. Even if you are into hunting fast-moving prey, the Sniper 370 will help you achieve success.

Some would think that the design is all about aesthetics, but for crossbows, that’s not entirely true.

For me, it’s all about the durability – and whether the crossbow will withstand even the all-weekend-long hunting sessions.

The design is lightweight, due to the aluminum rail – which is CNC-machined, with a shoot-through riser.

With a composite stock and compressed fiberglass limbs, the crossbow is rather easy at 7.9 pounds. It could be too heavy for some, though.

The noise could be the deciding factor for a crossbow. A silent crossbow is a crossbow to buy, and if it makes noise, that makes the crossbow useless outside of a shooting range.

The reason behind that is that the noise will spook the prey. Bucks have a very keen sense of hearing and they can be startled even with the slightest noises, and some crossbows can make more prominent noise.

I was delighted to find out that that’s not an issue with the Sniper 370. Integrated string suppressors keep the noise and the vibrations to an absolute minimum!

For the rookies in the crossbow world, let's start by saying what power stroke is.

Keep in mind that the power stroke isn't the only factor determining the speed of the shot. Various other features factor in - like the draw weight.

On the other hand, with the power stroke of 13.5 inches, along with the rest, you have nothing to worry about the shot speed of the Sniper 370. It will work like a charm!

The draw weight is also an important feature because it determines how fast the bolt will be able to go. With the 185 pounds of draw weight, the shot speed is not in question - it will be fast!

So, it's nice knowing that speed is not an issue, but there are other problems associated with the larger draw weight. Like, cocking the crossbow and shooting could be very hard.

It's always best to try out the crossbow before you buy it so you can tell if it's too difficult for you.

Even if it is too difficult, and you truly want to buy the crossbow, it's not the end of the world. The string will slide out very smoothly, and virtually without any stacking.

A mechanism called a roping mechanism is there to help you shoot. It takes away some of the draw weight to make it easier on your upper body.

The roping mechanism makes shooting with the Sniper 370 for people with a stronger build. If you’re a bit on the smaller side, it could be an issue.

Safety comes first in all kinds of businesses – and the same thing applies to hunting. Hunting can be dangerous as is – so it’s nice to know that your crossbow isn’t out to hurt you, too.

Having a safety mechanism (or more), helps you stay safe during your hunting. An anti-dry-fire mechanism has two advantages – keeping you and the crossbow safe.

A dry fire could do you damage, but it could damage the crossbow to an irreparable state. The Sniper 370 also has an automatic safety mechanism.

The only thing you have to do is remember the proper procedure for cocking the crossbow. First, turn off the safety and then use the cocking lever, before you finally pull the string back.

In essence, there are two available drawing methods for the typical crossbow.

For crossbows with lower draw weight, the method they usually have is the direct draw method. All you need to do is pull the handle on the back of the crossbow and draw the string.

Since the Sniper 370 has a powerful draw weight, it has a lever cocking method. It’s more popular and it’s easier to use – so it’s truly a benefit of this crossbow.

A lever integrated into the design is hidden away, with a lock switch that helps you further to draw the string. All in all, every hunter could benefit from a crossbow with the lever cocking method!

Speed of the shot is the number-one feature for every crossbow, without a doubt. The bolts play a role in you achieving success, but it all eventually comes down to shot speed.

Since the shot speed is essential for a successful hunt, so you’ll be pleased to know that it’s nothing to worry about with the Centerpoint 370. With a speed of 370FPS, it’s ideal for all types of games.

Small game or big game – it all works for the Sniper 370. The fast-moving prey like rabbits or deer can only be caught with a shot speed that’s more than decent, so you will be pleased to know that this crossbow can do it all.

Accessories for the crossbow are the stuff that comes in the package with it. Some things are useful, but you could live without some. So, let’s get in on it!

First, you will get a scope with your Sniper 370. It comes with a multi-reticle scope – which is not the high-end type, but it’s not useless either.

The multi-reticle scope sets sight on the target in a matter of seconds – and it’s holding zero to infinity. I, like most hunters, replace the scope included in the package because it’s of no use. With the Sniper 370, that wasn’t needed.

When we’re discussing crossbow bolts, it’s always good to get some in your package, and with the Sniper 370, you get 3, 20-inch bolts. They’re made of carbon, so any hunter will appreciate them, but the field tips are 100-grain.

However, there are better choices out there, with a larger grain count. 100-grains will not get the full potential of this, or any other crossbow out there.

The included wax is also great since you need wax to keep your string in check. Without using wax, you will find that the bowstring doesn’t last nearly as long as it should!

I scoured the internet to see the reviews of other people’s experiences with the Centerpoint 370.

It surprised me to see the positive reviews the people have! It was a pleasure to use it, and it’s good to know that other people enjoy Sniper as much as I did!

So, let’s check out some of the reviews from Crossbownation Forum:

For some people, the Centerpoint Sniper 370 simply won’t work, and for a variety of reasons. So, it’s best to see some alternatives that might work better for you and your needs!

Wicked Ridge’s Warrior G3 is an amazing crossbow, and for a slightly higher price, it offers a lot.

SA Sports’ 647 Empire Fever has a lot to offer, besides the almost 3 pounds lighter build - which is truly great.

PSE Archery made the Fang, one of the best affordable crossbows out there.

The official recommendation would be to check out all the alternatives, as well, before you finally add the item to your cart!

What Specs Do You Need To Hunt Deer?

Well, the first thing to look for is the draw weight.

The draw weight has to be at least 150 pounds or more - since the deer is a fast-moving prey. Also, the bolt head should be at least 0.75” wide.

The Sniper 370 is more of a recreational tool for hunting and practice. It’s more suitable for beginners, but it could be a solid choice for experienced users, as well.

Is The Assembly Hard?

Well, for beginners the assembly can be one of the harder tasks. Since there is no previous experience, it could be a difficult task - but the user’s guide can help.

If it’s of no use to you, consult a bow tech to help you with the setup.

What Does The Law Say About Using A Crossbow?

Each country, or state in the US, has a different law concerning crossbows and the rules about using them.

Before you use the crossbow, check the laws in your country to be sure you can use it for hunting.

To conclude, the Centerpoint Sniper 370 offers a lot for the medium-price range. 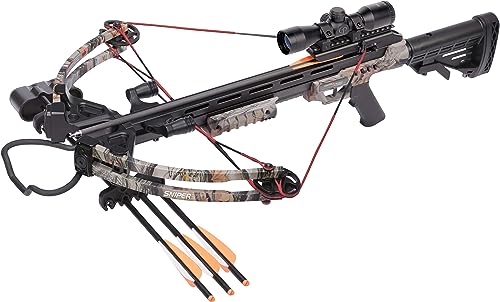 If you aren’t looking to spend a lot of money, but you want a good crossbow, the Sniper 370 is a choice that is more than just decent.

To finish, check out the detailed review to make sure it’s a good fit for you. Click here to see the Centerpoint Sniper 370!