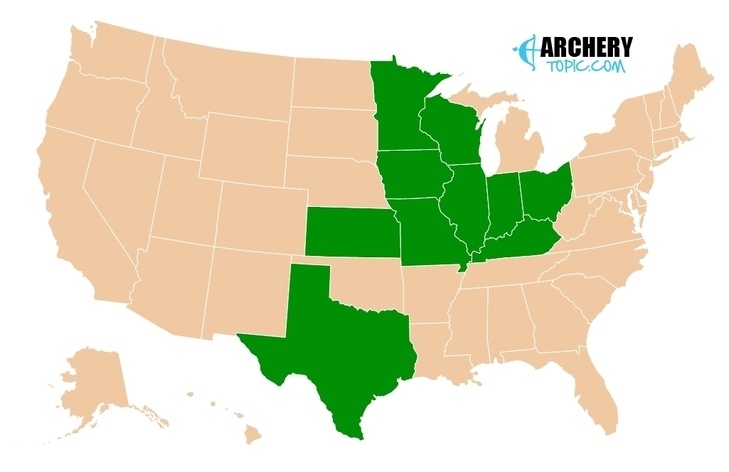 ​Many hunters every year choose to travel to hunt one of the 10 best whitetail hunting states.

A trip to one of these destinations yields excellent trophy buck potential and an experience that won’t soon be forgotten.

However, before a trip can be taken, you must decide where to focus your efforts. ​With the sheer size of the Lone Star State, a vast amount of opportunity is offered to any hunter that strikes out for this southern deer-hunting destination.

The extensive size of Texas lends itself well to individuals who would like to hunt a variety of habitat, all within a single state.

Those who visit Texas can hunt the pine woods of the east, the rolling hills and prairies to the north, or the expansive plains in the south, among a wide array of additional habitat.

Each region features its own distinct set of challenges for a hunter to contend with.

No matter where you go in Texas, the majority of the state is abundant in whitetail deer.

​Texas boasts the highest whitetail population in the nation, at over four million.

If a trophy buck is what you seek, the southern tip of Texas has historically been the highest producer of B&C entries. ​Although not as commonly mentioned among the whitetail greats as many mid-western states, Minnesota has been one of the top producers of B&C Record Book deer for many years.

The state boasts an extensive whitetail population, and deer hunting is very much a way of life in Minnesota.

If a trophy buck is what you are in search of, several counties turn out quality deer every year.

The counties running in a line from the west central to southeast areas of the state all offer above-average trophy potential.

Another characteristic that makes it Minnesota a deer hunter’s paradise is its abundance of public land hunting opportunities.

​Many counties offer public hunting land, with Otter Tail County, the state’s top trophy buck destination, being one of them. ​Missouri has shown its value as a noteworthy deer-hunting destination for quite a few years, and this is only becoming more evident as time goes on.

Missouri boasts an abundant deer population and a lengthy season in which hunters can go afield.

As far as trophy potential goes, Missouri holds its own, with a wide swath of counties turning out B&C entries yearly.

The Missouri River Basin and the counties that encompass it is typically the go-to area for monster bucks.

Missouri has benefited from antler restrictions that are on the books in a number of counties.

This fact combined with the fertile soils and abundance of agriculture found in the state equates to excellent trophy potential. ​The state of Indiana is yet another state that seems to be highly underrated by many for its whitetail hunting potential.

The state offers a high level of opportunity for bow hunters, as archery season coincides with the onset of the rut.

With the extensive amount of agriculture within the region, it is no wonder that bucks grow to epic proportions in the Hoosier State.

Those seeking trophy bucks tend to experience much success in the southernmost portion of the state, along its border with the Ohio River.

Indiana also offers over 55,000 acres of public hunting land - make it one of the best deer hunting states.

This gives hunters in the state ample opportunity to fill their tags.

Although these areas are heavily hunted, many trophy bucks are taken at such locations yearly.

​If you are seeking to travel to a state that is rich in ​whitetail hunting success, Wisconsin should rank highly on your list.

Wisconsin has been a mainstay of big buck hunting success for an extensive length of time.

Buffalo County, and the fame surrounding it, goes back more than thirty years.

This Wisconsin county was one of the original big buck hotspots to be featured within print among many famed deer hunting publications.

Wisconsin boasts one of the nation’s heaviest whitetail populations, with deer densities being extremely high in many areas.

Although the detection of CWD (Chronic Wasting Disease) within the state’s boundaries has been highly publicized, population numbers still seem to be holding steady. ​If you have deer hunted for any length of time, you have likely heard of Pike County, Illinois.

This county, as well as those surrounding it, has drawn hunters from far and wide due to its reputation for trophy bucks.

In reality, most of the state features much of the same potential.

Illinois is a paradise for whitetail deer, offering a near-endless buffet of crops for forage.

This large amount of forage leads to quality nutrition for the deer that utilize it.

This nutrition not only leads to a high number of healthy deer but an above-average ratio of monster bucks as well.

North-central Illinois has traditionally been the destination of choice for those seeking a chance to bag a buck of a lifetime.

However, in recent years the state’s southernmost counties along the Ohio River have shown much promise. ​The Buckeye State has built a well-deserved reputation as a dream destination for deer hunters.

Hunters across the nation have started to turn their attention to Ohio in recent years, and for good reason.

The state has logged nearly 500 B&C entries in the past decade.

Ohio features wide-ranging habitat that offers hunters a multitude of opportunities, and the state’s deer population only continues to grow.

If you enjoy late-season hunting, this state has you covered.

Ohio offers one of the longest-running seasons in the nation, ending in early February.

A substantial amount of public land also exists in Ohio. This includes public lands in all three of the state’s top-three trophy buck producing counties.

This levels the playing field, presenting great potential even for those that cannot afford a lease. ​Kansas is quickly gaining a reputation for being an elite whitetail deer-hunting destination.

It seems these days that every big buck gracing a magazine cover hails from Kansas.

Although Kansas is home to fewer whitetails overall than most other states on this list, its trophy potential is off the charts.

The reason for this high level of trophy bucks seems to have a lot to do with the state’s fairly even buck to doe ratio.

The result is a balanced and healthy deer herd that is better equipped to receive maximum benefit from the habitat that they call home.

If you are in search of a trophy buck, the state’s easternmost portion is where you will likely want to focus your efforts.

However, non-resident permits are awarded through a draw system, so it is advised to begin applying in advance of when you wish to hunt. ​Iowa is a true land of giants. This fact has become well known to anyone involved in the world of whitetail hunting.

Much of this fact can be attributed to Iowa’s limitation on the number of yearly non-resident hunters.

This assists in keeping hunting pressure down, as well as allowing more bucks to grow to maturity.

Iowa requires non-resident hunters to enter a drawing to be awarded a tag.

Therefore, if you are pondering a trip to Iowa, it is advisable to begin applying immediately.

If drawn, you will benefit from Iowa’s extensive public land offerings.

With over 300,000 acres of public hunting land to choose from, as well as a private land access program, much opportunity exists. ​If you're still wondering 'what state has the biggest deer population?', Kentucky has the answer for you.

​With a deer population that numbers nearly 900,000 strong, ​there is absolutely no shortage of deer in Kentucky.

Kentucky also offers an amazing opportunity for bow hunters to stay afield for a significant portion of the year.

The state’s archery season typically begins the first week of September and runs through mid-January.

Kentucky also utilizes a one buck a year limit that assists in promoting maturity among the state’s deer herd.

One of the most notable characteristics of deer hunting in Kentucky is that trophy bucks are regularly killed in all areas of the state.

From croplands in the western sector of the state to the mountains of the east, trophy bucks are produced in nearly every county on a yearly basis.

​Now that you know the 10 best whitetail-hunting states, you are better equipped to plan your dream hunting trip.

​With this knowledge, you should now be able to select your destination and enjoy all that the trip brings. Feel free to comment or ask any questions that you have.

17 Proven Trail Camera Tips and Tricks
How to Layer For Cold Weather Hunting
What are the Advantages/Disadvantages Of Hunting From An Elevated Stand?
Deer Hunting with Decoy (A-Z Guide)
Best Hunting Dog Breeds (Ultimate List)
How To Apply Camo Face Paint For Hunting